Robert Biedron, a political contender who is rising un the ranks in Poland, is vocalising gay rights and tackling the problems LGBT+ people face within the country.

Along with being the first openly gay politician and mayor in Poland, Biedron is also an atheist. Although, he is currently being viewed as a frontrunner for Poland’s presidency. Bierdron is the mayor of Slupsk, a northern city close to the country’s Baltic Sea coast”

In an interview with the BBC, he said:

“I’m a dreamer. I was born in a very traditional, conservative part of Poland. I am gay and being an atheist, it wasn’t easy for me.”

“I’m a dreamer. I was born in a very traditional, conservative part of Poland. I am gay and being an atheist, it wasn’t easy for me.”

While being a dreamer, Biedron was also incredibly strong. He was 42 when he became the country’s first gay MP back in 2011, and then the mayor of Slupsk in 2014.

But being left-wing and a gay rights activist, means he’s fallen target in his area – and was beaten up four or five times on the street while he was an MP.

“Now, they are all smiling at me and greeting me,” he said.

(Before) “they would probably have said ‘you faggot’, or they would spit at me. Today, they say- ‘Good Morning Mr Mayor’ and this is a sign of change.”

Today, Biedron is talked about highly and is expected to be one of the leaders of a new progressive political movement being organised in Poland. He has also been urged by former polish President to run for the 2020 election as the first gay President of poland.

Biedron and his partner have been together for 15 years and they hope that together they can have an impact on Poland’s view on homosexuality.

In the country, the view of homosexuality is changing, slowly but surely, but legal equality such as same-sex marriage is still outlawed. This is frustrating for Biedron because, as mayor, he marries many couples:

“I’m extremely jealous because I see their happiness. I’m 15 years with my partner and it’s still a dream. It’s not fair that in 2018 two adults cannot get married if they love each other and are committed to each other.”

Poland is an extremely conservative country, with a current parliament with an outright majority for conservative Law and Justice (PiS) party. Despite this, PiS easily remains Poland’s most popular party. Although luckily, this is not the case in Slupsk, a city of more than 90,000 in north-western Poland.

“Poland is not only devoted to a conservative, populist, authoritarian political party,” says Mr Biedron.

Not only is he an advocate for gay rights, he’s also taken a pay cut, doing so has reduced the city’s debt by tens of millions of Zlotys. He’s also boosted spending on education and social housing and is building a new theatre. 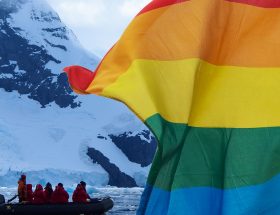 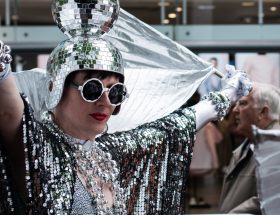