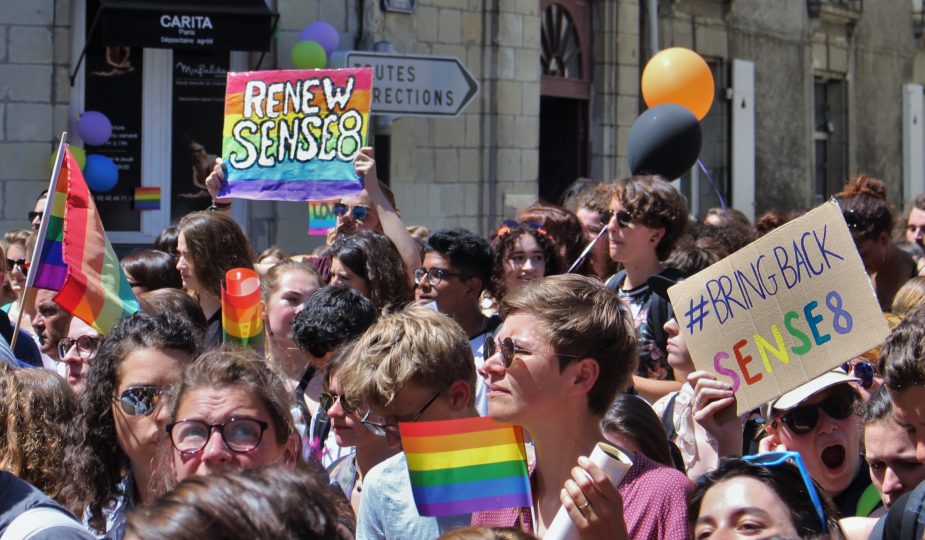 You might have heard recently that Brooklyn 99 was cancelled by Fox TV, but due to an uproar from fans on Twitter, the show will come back for its sixth season after being picked by NBC. Good for the fans of that show, but I do wish the same had happened with Sense8.

After the show’s second season came to an abrupt cliffhanger ending, Netflix decided Sense8 cost too much to produce, with each episode allegedly setting them aback $9m so they cancelled the show on 29 June 2017. That is indeed a lot of coin, but to many the show was a masterpiece, with its captivating plot and positive message that seemed to resonate within LGBT+ communities all over the world. Instead of a whole season, we got a single two-hour special for June 8, all thanks to the fans of the show who united to bring it back.

It is rare, even nowadays, that we get to see inclusive shows, casting people of diverse ethnic and cultural backgrounds. Even Netflix, the bliss of the millennials’ times, and the one thing that every person has an account for or is using their roommate’s one for a discourteously long time, sometimes makes poor decisions as to whom to cast. Take their adaptation of ‘Death Note’, the famous Japanese anime series and manga. Instead of picking the person of Asian descent that had auditioned for the main role, they cast the very white and western looking Nat Wolff, and even renamed the main character to suit his appearance.

However, from time to time Netflix do get their stuff together well, especially with Sense8. It is probably the most inclusive show ever when it comes to representing races, cultures and sexual orientation, featuring actors and crews from all over the world. Travelling costs for the filming crew and actors are hefty, but you cannot put a price on representation. People pay extra £2 for organic fairtrade bananas because it is the ethical and healthy thing to do. I am pretty sure producers and companies should do the same with casting, and make sure there is better representation.

They even cast a trans woman to playa trans woman – a shocking decision, even in 2016. Jamie Clayton does an exceptional job as genius hacker Nomi Marks, the brains behind the group of main characters. The producers of the series, Lana and Lilly Wachowski, are also trans women. Who would have thought that trans people make such good writers?

The plot revolves around a subspecies of humans called sensates – a group of people born at the same time, who are connected mentally and can communicate even when they are thousands of miles apart. They feel pain, happiness, sadness, love whenever one of the other sensates is experiencing thatfeeling. The species is in danger as it is being hunted down by an organization for their own malicious purposes. The show is also very open with sex scenes and unapologetically showssame-sex romance.

Oh yeah, they are also kind of hot. The cast of the series have also been keen guests of pride events all over the world, cementing themselves and the show as an essential part of queer culture.

With June 8 just around the corner, there is still time to catch up with Sense8, and hopefully Netflix have done a good job of compressing a whole season into a two-hour-special finale.